Marking the 75th anniversary of the Manhattan Project and the race to split the atom, collectibles company adds ultra-rare glass to public collection. 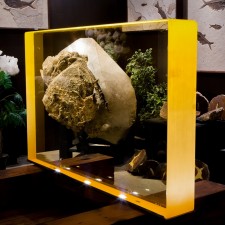 The Manhattan Project was the codename for the research and development effort which allowed the United States to rapidly develop a series of atomic breakthroughs during World War II. The project involved over 100,000 workers at more than 30 sites across the United States, including well-known locations such as Oak Ridge, Los Alamos, Trinity, and Hanford.

This rare, complete shield window was once installed in the T Plant (221-T) Plutonium Recovery Building, the first and largest of two production bismuth-phosphate chemical separations plants used to extract plutonium from fuel rods irradiated in the Hanford Site’s reactors. The window measures 54” wide by 6” deep. Comprised of 30% lead-oxide, it weighs 1,700 lb.

During WWII, engineers at Hanford would look through this glass while extracting plutonium for both the Trinity test on July 16, 1945, and the "Fat Man" atomic bomb used over Nagasaki, Japan on August 9, 1945. The windows were purchased from a government surplus auction in the 1980s as the plant was being decommissioned.

After acquiring fragments of the material, Mini Museum featured the glass in its public Fourth Edition collection. A detailed article featured in the hardbound book accompanying the collection has been reproduced on their website. The article, titled “Nothing Would Ever Be the Same”, chronicles the history of the Manhattan Project and personal stories from the scientists who worked on the program and the survivors of the Nagasaki bombing. It features photographs and letters from the National Archives.

“The Manhattan Project is among our most challenging specimens, so it is very important to provide historical context,” said Mini Museum Co-Founder, Jamie Grove. “Juxtaposing the technical achievement of the Manhattan Project with the cost in human life in a time of war and the ongoing threat of nuclear annihilation is a deeply emotional issue.”

The company expects to place this unique item with a private collector or with a large, public institution. Smaller fragments of similar windows are also available for purchase on the company’s website at prices ranging from $39 to $1,500.

About Mini Museum
Mini Museum is a global collectibles company focused on sharing a love of science and history with the world. Since 2014, their public collection has grown to encompass hundreds of different topics spanning across billions of years of history. With customers in more than 120 countries, Mini Museum has delivered over 1,000,000 rare objects to collectors, educators, and fans around the world. Learn more about Mini Museum at minimuseum.com.

Mini Museum creates personal collections of rare curiosities from Earth and beyond. Handcrafted and designed to last for generations, each Mini Museum is a limited edition collectible where each specimen is authentic, iconic, and labeled.