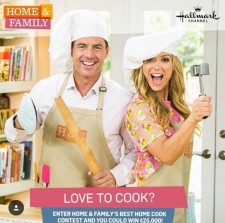 Universal City, California, May 12, 2017 (Newswire.com) - Hallmark Channel's Emmy®-nominated daytime talk show "Home & Family" is on the search to find “Home & Family’s Next Best Home Cook.” If you love to cook and have a great personality, then this is the contest for you. Not only can you win $25,000, but you can also join Emmy® Winner Mark Steines and two-time Emmy® nominee Debbie Matenopoulos and become a part of “Home & Family’s” recurring cast. All you have to do is submit a video sixty seconds or fewer showcasing your culinary talents and prove why you should be crowned “Home & Family’s” 2017 Best Home Cook.

To enter, send your video to HFhomecook@gmail.com or go to “Home & Family’s” Facebook page at Facebook.com/homeandfamilyshow and click on the contest tab to upload your video. The winner will be announced in June 2017.

“Home & Family,” currently in its fifth season, tapes at Universal Studios Hollywood, and is the only daytime lifestyle series on cable television with 52 consecutive weeks of new episodes. This season features even more fresh advice from experts at the top of their fields. These captivating experts make “Home & Family” the “Ultimate How-To” show, and a series honored for its excellence with two Daytime Emmy® nominations.