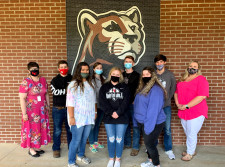 Candace Sandifer has taught the Jumpstart review program to Lawrence County High School's students since 2018. Sandifer said, "I love the Jumpstart Test Prep program. It is a review that is specifically designed in an ACT format and it really helps our students improve their scores because it goes back to the basics and reviews from the beginning. Not only does Jumpstart provide students with a thorough review, it gives them challenge questions and an assessment to pinpoint areas of weakness in Math and English. Jumpstart also helps them to improve their time management skills by encouraging them to answer questions within an allotted time frame." She continued by saying that, "I am a strong believer in Jumpstart Test Prep. I have seen the lightbulbs come on for a student when reviewing with Jumpstart. I have seen the improvement results, and I know that the Jumpstart review program works."

Several students were recognized for having significant increases in their ACT scores, and they shared their thoughts about how Jumpstart Test Prep impacted their scores. Dylan Bryan had a 55% improvement over his prior best English subscore, increasing by 6 points. He said, "Jumpstart helped me in many ways: it reviewed many things I had forgotten, broke down everything so that I could easily understand it, and the English tips were amazing." Ashlyn Howell, who achieved a 6-point improvement in Math, going from a 20 to a 26, commented, "Jumpstart made the difference in helping me prepare for Math because it reviewed a lot of trigonometry and that really helped me. It was not overwhelming, and they explained everything in a way that I could understand it." Howell encouraged future students to use Jumpstart to prepare and said, "Don't take it for granted, it really does work."

Jakob Hedgepeth was very happy with his achievements after using Jumpstart Test Prep. He realized a 5-point improvement in Math, increasing from an 18 to a 23. Hedgepeth also achieved a 5-point improvement in English, going from a 16 to a 21. He shared, "Jumpstart really made the difference because it went over information that I had forgotten from grades ago. I think that students across Mississippi should use Jumpstart to prepare for the ACT; it helped me and my peers succeed, and I know it can help others, too." Anna Herring increased her Math subscore by 7 points, from a 17 to a 24. She said, "Time management is a big issue for me, and Jumpstart helped me greatly with this. The countdown timer on the challenge questions made a difference for me." Savannah McCullough, who increased both her Math and English subscores by four points, commented, "Jumpstart Test Prep made the ACT a lot easier for me because it reviewed things I had forgotten and gave a thorough explanation of it all." Makenize Mealer agreed with McCullough, "Jumpstart helped me by breaking everything down and giving tips that were easy to remember." Mealer scored a 21 in the English subsection on her first attempt at the ACT.

Jumpstart Test Prep is an online review program based on over 50 years of work by Dot McClendon, a legendary educator and Mississippi's 19-year STAR teacher hall-of-fame inductee. "As a teacher at The Mississippi School of the Arts and several other schools during my career, I was able to help guide the preparation of students in person," said McClendon. "Now through our online, on-demand video review, students in Lawrence County classrooms, as well as classrooms around the country, around the breakfast table, or on the couch at home, are able to benefit from our approach."

All juniors at Lawrence County had access to the following resources: