2018 Maintains the Skyscraper Construction Momentum of the Previous Decade

CHICAGO, December 12, 2018 (Newswire.com) - The Council on Tall Buildings and Urban Habitat (CTBUH) has released its annual report, the "2018 Tall Building Year in Review," part of the Tall Buildings in Numbers data analysis series. The report shows that 143 buildings of 200 meters’ height or greater were completed in 2018, including 18 “supertall” buildings of at least 300 meters’ height, a new record. The total number of supertall buildings worldwide is now 144. In 2013, there were 76 buildings 300 meters or higher worldwide; in 2000, only 26. The 528-meter Citic Tower in Beijing was the tallest building completed in 2018.

China has maintained its reign as the most prolific country when it comes to the construction of tall buildings, with 88 completions in 2018, for 61.5 percent of the total. This is a record for China, exceeds last year’s figure by eight, and represents an even greater proportion of the global total than the 2017 figure of 54.4 percent. China’s previous record was set in 2016, with 86 buildings of 200 meters or higher. Second place was again held by the United States, with 13 completions, up from 10 in 2017. And once again, outdoing its own record from last year, Shenzhen, China, recorded 14 completions, making this the third year in a row in which the city accounted for the world’s largest number of 200-meter-plus completions, and comprising nearly 10 percent of the global total.

“Given the rate of urbanization seen in the world – and that we must build the equivalent of a new city of 1 million people every week to accommodate this growth – it is not surprising that the pace of tall building construction continues,” said CTBUH Chief Executive Officer Antony Wood.

Other dominant characteristics of the 200-meter-plus set included the office function (42 percent), and concrete as the main structural material (62.9 percent). The average height of 200-meter-plus buildings completed in 2018 was 247 meters, a slight increase over the 244-meter figure for 2017. The average height of the World’s 100 Tallest Buildings grew to 381 meters.

CTBUH examines buildings 200 meters and higher due to the completeness of available data for buildings in this category.

View the full interactive report on The Skyscraper Center. 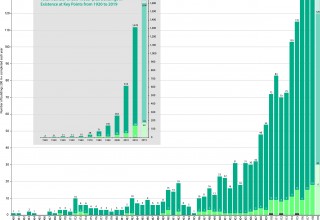 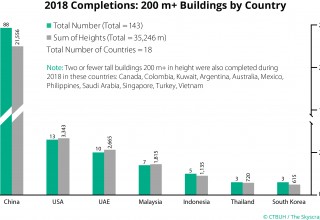 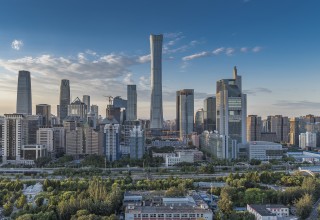 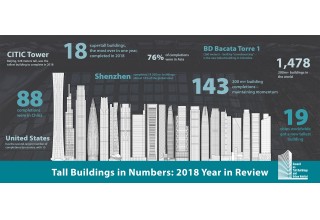 About Council on Tall Buildings and Urban Habitat

The CTBUH is the world's leading resource for professionals focused on the inception, design, construction, and operation of tall buildings and future cities.