"The primary languages of the women's tennis tour have expanded in recent years, with English, Spanish and French being joined by Russian and Chinese. But a new language is making inroads on the practice courts and in player restaurants, and even in the later rounds of important tournaments: Polish." -New York Times 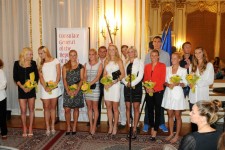 New York, NY, August 25, 2016 (Newswire.com) - For the past seven years, on the eve of the US Open, SG Doyen organized players’ party for the top tennis stars from Poland and of Polish descent. This year, once again on Friday, August 26, 2016 at 7:30 pm, at the beautiful INGLOT Cosmetics Studio, SG DOYEN and RS TENNIS FOUNDATION will be hosting the “Party at the Net” for some of this year's US OPEN top tennis players.

Besides, the long guest list includes such players as, Urszula Radwańska of Poland, Aleksandra Wozniak & Gabriela Dabrowski of Canada,  Alicja Rosolska, Magda Linette and Paula Kania of Poland,  Dominic Inglot of the Great Britain, Tim Smyczek and Martin and Michael Redlicki of the USA to name just a few. Other special guests include the two-time Australian Open champion - Johan Kriek.

The party will feature exquisite cuisine and amazing desserts (curtesy of Charlotte Patisseries) to the mixt tunes of DJ “Ziggy.”