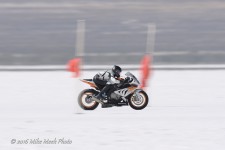 Sills shared this: “I’m continually impressed with the dominance of the BMW S1000 RR and incredibly proud of our team’s accomplishments this season. We had an amazing week, building on our 2013 records and adding more to the 2016 win column for BMW. These records were all set in the 1000cc naturally aspirated category, which means no turbo is on the motorcycle.

The first record we set was the AMA Production 1000cc (p-p) record at 207.973 mph. The old record was 200.1 mph set by Honda, so it was nice to take this one back for BMW. The second record was Modifed Gas (mps-g), which we set at 209.773 mph. The prior record was 209.391 mph, which was my record from 2013. The third record was Unfaired (naked), that I set at 194.056 mph. The prior record was 182 mph, so increasing it by 12 mph was significant. This gives the team all five of the AMA records and both World records available, in addition to the Magnum and Mojave Mile championships … a clean sweep for the season.”

The Hunter Sills team also awarded the $2,000.00 SheEmoto Scholarship during the BMST event.  The scholarship, founded by HSR in 2006, is awarded annually to the female racer who embodies the spirit of landspeed racing … tenacity, competitive drive, wisdom, passion, camaraderie and perseverance.  Historical winners include top-speed females such as Leslie Porterfield and Eva Hakansson. This year the Scholarship went to long-time Suzuki Hyabusa racer Erin Okonek for her many accomplishments in land speed racing.”

At the SCTA event a week earlier, Sills set the Production 1000cc record at 200.920 mph, which allowed her to become a lifetime member of the prestigious Bonneville 200 mile per hour club and she accepted the late Andy Sills’ 200 MPH Club “red hat” with honor. This is in addition to placing first at the Mojave Mile earlier this year, and setting the production record at El Mirage, earning the El Mirage 200 mile per hour club lifetime membership.

“We are thrilled to yet again to see Erin Sills’ performance on the BMW S1000RR,” added Gary Orr, owner of San Diego BMW Motorcycles.  “Having the production, modified, and naked records as a team as quite an accomplishment. For Sills to continue to break her own records speaks to her skill level as our rider. We knew the bike could do it based on our strong performance at the Mojave Mile and SCTA El Mirage events earlier this season, and we knew Sills could do it as well.”

Alpine Performance Centre, located in Victoria Australia, has a long relationship with BMW building performance engines and bikes for World Superbike, domestic Superbike, as well as land speed racing; earning dozens of podium and first place finishes over the past 10 years.