Athletes, city officials and educators team up to bring the truth about drugs to the youth of Hungary. 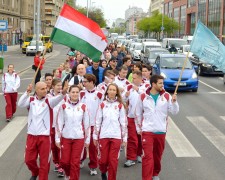 Budapest, Hungary, May 10, 2017 (Newswire.com) - Completing a grueling 42-day run, the athletes of the Drug-Free Hungary Marathon have traveled some 2,000 miles, bringing their message of drug-free living to youth in 300 towns and cities.

The EMCDDA also cites a 2011 nationwide study on drug use among 16-year-old Hungarian students by the European School Survey Project on Alcohol and Other Drugs (ESPAD), showing 19 percent had tried marijuana or hashish.

The results of both studies indicate that drug use, particularly cannabis and amphetamines, has become more prevalent among school-age adolescents.

Reversing this trend and helping youth make the self-determined decision to live drug-free is what motivates the runners to carry out their annual drug prevention project. The UN Office on Drugs and Crime (UNODC) has found that “For every dollar spent on prevention, at least ten can be saved in future health, social and crime costs.” By reaching youth with the truth about drugs, the Marathon for a Drug-Free Hungary makes a difference in thousands of lives.

In some 300 towns and cities across the nation, the athletes hold drug awareness events with local mayors, city council members and other civic leaders welcoming them and participating in the rallies. Marathon members present drug education lectures and hundreds of youngsters pledge to live drug-free. Then the town gives the athletes a sendoff, often accompanied by local school children running along with them as they head for the next stop on their 42-day schedule.

The Drug-Free Hungary Marathon uses the drug education materials of the Foundation for a Drug-Free World, a nonprofit public benefit corporation that empowers youth and adults with factual information about drugs so they can make informed decisions to live drug-free.

Through its worldwide network of volunteers and partnerships, it has distributed more than 80 million drug education booklets since they were first published in 2006.