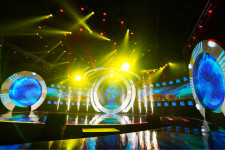 This year's contest, with "Dream Chinese, and Live up to Your Youth" as its theme, attracted more than 30,000 students from 87 countries.

The overall competition is divided into two stages: the overseas preliminaries and the global finals. One hundred players were selected for the finals after the preliminaries. In the end, five contestants with decent Chinese proficiency stood out, they were Rio Ohori (Japan), Jasmine Petty (Australia), Marina Hu De Jesus Manuel (Mozambique), Edilian Uceta Espinosa (Dominica), and Diaz (Spain).

There were five rounds in the finals. The first three rounds "Picturesque Landscape," "Rich and long History," and "Gourmet China," were objective multiple-choice questions, which mainly examined the players' understanding of China's online shopping, Winter Olympics, ecology, folk customs, Chengyu (Chinese idioms), operas, cuisine, and aerospace technology. The fourth round of "Practicing while learning" required players to use any word of "Sour, Sweet, Bitter, Spicy" to express their feelings or interesting stories about learning Chinese. Dominica's Espinosa said the process of learning Chinese was just like riding a roller coaster. During the ups and downs, he tasted many sweets and bitters. Diaz was amazed by the spicy Chinese cuisine and shared her fun experience at a Chinese restaurant.

Based on the scoring situation of the players and the on-site judges, two players challenged the fifth round of "Impression China" and one seized the final championship. Japan's Ohori and Spain's Diaz gained two seats at the final stage, and Diaz won the champion.

In addition, a mysterious guest co-hosted at this year's finals. "I am C Bridge, from a pulsar 16 light-years away from the earth." The self-introduction of the intelligent robot "C Bridge" caused a burst of laughter at the scene. It is reported that "C" in the name of "C Bridge" is not only the initials of "China," but also the initials of "communication," which embodies the beautiful vision of the "Chinese Bridge" World Chinese Competition for Secondary School Students, which aims to provide a stage for young students from all over the world to learn Chinese and build a platform for mutual learning and communication.

This year marks the 20th anniversary of the "Chinese Bridge", which has attracted over 1.5 million teenagers from more than 160 countries in the past two decades. The competition aims at building up a bridge of "language, culture, friendship, and heart" for teenagers from different countries and cultural backgrounds.