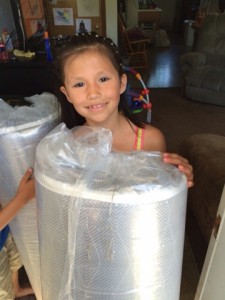 Sumner, WA, May 31, 2016 (Newswire.com) - 1,000 new mattresses have been donated by mattress retailer Mattress Ranch and its manufacturing partner, Sound Sleep Products, to underprivileged children in 18 of Alaska’s most remote villages. The donation is in support of the Boys and Girls Club of Alaska’s "Beds for Kids" program. Children from the ages of 5-15 in each village will receive their own new mattress.

Mattresses are being delivered to locations as geographically diverse and difficult to access as the Arctic Slope, Bering Strait, Lower Yukon, Bristol Bay and SE Alaska. Most villages are only accessible by small plane or boat.

Lynden Transport has donated the shipping of the mattresses to Alaska and onto many remote locations. Several aircraft operators are donating space on their planes for final delivery. The deliveries should be completed by the end of June.

John Larsen, CEO of Sound Sleep Products, and Ted Sadtler of Mattress Ranch accompanied the first of the mattress deliveries on a Spernak Air small aircraft to the village of Tyonek, population 193, located on the Kenai peninsula.

Upon arrival, Ted and John were welcomed by Jennifer Brown of the Boys and Girls club of Alaska and the representatives of of the Tyonek Boys and Girls Club.  John and Ted were led to the school gymnasium where they had an opportunity to meet some of the 38 children who each received a new mattress.

One child approached Ted and asked him if he was Santa Claus. Ted, the flamboyant public persona of Mattress Ranch, responded, “ No, I’m not Santa. I am just an old guy having fun and trying to make a difference.”

The children had an opportunity to jump and play on the mattresses as part of the celebration. Each were clearly excited to receive a new bed.

“There isn’t anything more gratifying than to see the smile on a child’s face,” states John Larsen of Sound Sleep Products. “ We all know how important a good night’s sleep is to a child’s development.”

“These mattresses are likely the only mattresses these children have ever owned,” states Guy Klabunde, the Director of Alaska Native Partnerships for the Boys and Girls Club of Alaska.

“It is common for 3-4 children to sleep on one threadbare mattress or on the floor. We are so appreciative of the generous donation and the impact these mattresses will make in the children’s lives.”

63 mattresses were recently delivered to the village of Metlakatla, an island village near Ketchikan. Because of its relatively inaccessible location, the mattresses were delivered by a purse seine fishing boat owned by a villager.

“As two of the mattresses were presented to one family, the mother and children all burst into tears. They were tears of joy, of course,” shared Guy, clearly emotionally moved.

The Boys and Girls Clubs play a critical role in these small villages. Suicide and drug abuse are rampant in these very remote locations. There are few jobs and young adults often foresee a bleak future. Hunger is common amongst the children and their families. Villagers often eat only what they harvest as subsistence hunters.

For the project, each mattress was compressed, rolled and wrapped into a bundle not much larger than a duffel bag. This allowed for efficient transport in sea containers, automobiles, boats and small aircraft. Surprisingly, within 30 minutes of opening the mattresses, the beds return to their original shape, ready for the children’s sleep.

Guy Klabunde, the Director of Alaska Native Partnerships for the Boys and Girls Club of Alaska, has done a tremendous job coordinating the delivery of the mattresses and working with the many participants.

In addition to Mattress Ranch, who spearheaded the project and Sound Sleep Products whomanufactured the mattresses, several other companies played a key part in the endeavor.

For Media inquiries or to schedule an interview with John Larsen, Guy Klabunde, or Ted Sadtler, please contact Brad Fransen at 253 880 6342 or via email at brad@soundsleep.com.