1 in 6 African American Men Will Get Prostate Cancer

Harold Leffall was the 1 in 6 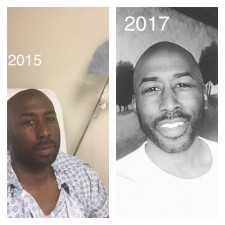 Benicia, CA, April 20, 2017 (Newswire.com) - According to You Are Enough Now, 1 in 6 black men will develop prostate cancer. Close to 30,000 men die from the disease every year. It is the fourth most common cause of death in black men.

In 2015, Harold Leffall became the 1 in 6 to be diagnosed, after taking a prostate-specific antigen (PSA) blood test that was prompted when he mistakenly told his doctor that his dad had been diagnosed years prior with the disease. Harold later discovered that his father never had prostate cancer but had been diagnosed with an enlarged prostate. This error possibly saved Harold's life, because men with no family history of prostate cancer typically are not given a PSA test until age 50. Harold was 47 when he was diagnosed. Harold, a self-proclaimed health enthusiast, was completely surprised by the diagnosis. He was in great shape, exercised regularly (5 to 7 days a week), juiced regularly and drank wheatgrass. Harold says, "I never thought I would hear the words: You have cancer."

Because the cancer was caught early, Harold opted for seed implantation, where over a 100 radioactive seeds were implanted into his prostate. The radioactive seeds give off low-dosage of radiation to kill the cancer in the prostate. Two years later, although he still has some of the side effects from the radiation, he is cancer-free. Harold has used this life-altering experience to start what he calls the "You Are Enough" movement to remind individuals who are going through life challenges that they can get through whatever they are going through. The movement includes workshops and empowerment apparels.

Source: You Are Enough Now

About You Are Enough Now

You Are Enough Now is a personal development company that produces empowerment workshops and apparel.