PositiveSingles, the premier online herpes dating site providing love, support, and hope, today announced the introduction of a new "Recall" feature. It's a new facility that helps members "recall" and "unsend" any message they have already sent out. 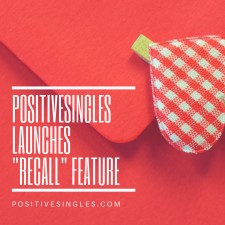 MOUNTAIN VIEW, Calif., June 27, 2018 (Newswire.com) - According to the platform’s spokesperson, the new feature was added in the hope it would help diminish the inconvenience of what they term, "text regret." The Positive Singles team, who have been closely following users' unconscious and emotional need, said feature was developed and created according to their users’ feedback.

Positive Singles is known for targeting singles who are affected with sexually transmitted diseases, namely Herpes or HIV singles. For persons who wish there was a place where they didn't have to worry about being rejected or discriminated against because they are herpes singles, PositiveSingles has proven to be the answer.

Persons who suffer from Herpes, HPV, HIV or any STDs often feel like they are all alone in the world, but its legion of members have come to find PositiveSingles.com a rallying point for herpes dating where to they can find love, support, hope, and a positive vibe.

According to one of its happy members, “I met my bf on this website. Last May. Things are awesome thank you! I definitely wouldn’t have met Kevin otherwise. Having an STD has always been tough for both of us to find a partner.”

And another said: “I honestly never thought I’d find someone this amazing, but I’m glad to have been proven wrong,” courtesy of being a member of PositiveSingles.com.

With the inclusion of the new ‘Recall’ feature, PositiveSingles.com pointed out further that the above are just two of many members of its platform who “will find it readily and easily solves a common fear or regret during social networking, especially among these most sensitive people.”

“We are sensitively aware of the value of the feature to our herpes and HIV single membership, and as such, we have deemed it necessary to launch this recall feature into our app, while other platforms are still planning to implement a similar one,” explained the spokesperson.

New Update Page for 'COVID-19 Coronavirus Outbreak'
​COVID-19 Coronavirus is something that is at the front of many peoples' minds understandably. This has created a large demand for up-to-date and accurate information regarding infections and the spread of the virus. While PositiveSingles' main focus is helping singles with herpes connect for friendship, romance, and possibly more, they also care deeply about the world. Knowing their website has an extremely large reach, the team behind PositiveSingles is using it to help keep people informed about the Coronavirus.
Positivesingles.com - Mar 10, 2020
Positive Singles to Participate in National Women and Girls HIV Awareness Day
Positive Singles has announced that they will be taking part in the National Women's and Girls' HIV awareness day. This day is held on March 10 by the Office of Women's Health of the Department of Human and Health Services.
Positivesingles.com - Mar 3, 2020
Positive Singles Launches Herpes Dating Services for New York People Living With STDs
Positive Singles, one of the top dating portals, has recently announced that they have launched new STD dating services for people from New York. This is a great feature that can help New York people suffering from sexually transmitted diseases.
Positivesingles.com - Feb 14, 2020
Newswire