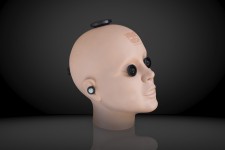 Known for its earlier advances in stitchless VR post production and several new filming techniques, VR Bangers new Head Rig adds a personal touch to the audio and video of virtual reality adult related scenes. VRBangers.com CTO Boris Smirnoff says that with the new VR Bangers POV Head Rig, fans can finally feel like they are getting kissed and caressed, while their favorite girls whisper right into their ears.

“This rig was built especially for adult VR scenes because we noticed that there is a much warmer and more intimate emotional attachment between the performer and the recording device if the device itself is able to be kissed, caressed and whispered to in the same sort of ways that a real person would sense those subtle communications,” explains Smirnoff. “It’s easy to think that performers will be able to overcome all the odd positions and constraints of filming content so it looks pristine on a virtual screen, but the fact is, the more we can help our models get the most out of their play space, the better our content will continue to be and the real winner in this line of advancements is always our fans.

Smirnoff reveals that rather than cradling a camera or a microphone and pretending to be engaging with a fictional love interest, the girls of VR Bangers (http://www.vrbangers.com) can work with as close an approximation to a human head as modern technology allows.

“Our original intent was to include this new rig in the presentations at CES 2017 because we are confident it is one of the hottest new tech items to come out at CES in a long time, but the show didn’t allow us in because they still think this industry and tech are different or something,” Smirnoff says. “The truth is that our industry has always been at the forefront of improving interpersonal technologies.”

Smirnoff says that this is the first rig of its kind, and was custom built by their own R&D team.

“Stereoscopic cameras right where its eyes would usually be, true 4K resolution at a mouthwatering 60fps using multiple cameras on the front, back and top of the head to capture every angle, along with state of the art binaural sound microphones in each ear to add a level of realism to each whisper, moan and shift in sound,” Smirnoff explains. “The content we are recording with this new rig is extraordinary, and the feedback our fans are giving us at the shows demonstrates that we are definitely moving in the right direction.”

“Virtual Reality is no longer a future technology,” Smirnoff concludes. “It’s happening right now, and your chance to cash in on the best of VR adult content is staring you right in the face… just like this new VR POV Head Rig.”