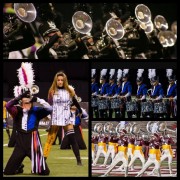 ‘Hard Corps’ is a high octane docu-soap set in the competitive world of  Drum Corps International. This cadence is set as the series follows two all-star teams, one in Pennsylvania and one in Northern California, who for the last 20 years, have been battling it out for the championship. Eat, sleep, band - repeat! Production began in November at locations throughout the United States as cameras capture the excitement, struggle and dedication of marching music’s major league. The series will culminate at the world championships in Indianapolis, Ind. August 2016.

"The entertainers have incredible tenacity, drive and a hard core commitment to excellence. Viewers will be on the edge of their seats seeing who comes out on top," noted Johnson. “At Seven Bucks we are passionate about shining a light on the hardworking and the talented. This group of performers fall into both of those categories," said Garcia.

Said Fuse Media President Bill Hilary, “The energy and competitive edge of Drum Corps is the perfect backdrop to celebrate music and performance with our rapidly expanding audience of culturally diverse New Young Americans.” He added, “’Band on the run’ will have a whole new meaning once ‘Hard Corps’ hits our air. We look forward to working with Seven Bucks Productions and 44 Blue Productions on this series.”

‘Hard Corps’ will showcase the exciting intersection of music and sports,” said Rasha Drachkovitch, executive producer and co-founder/CEO of 44 Blue Productions. “With the complex routines and high stakes pressure of competition, this series is part ‘Bring It’ and part ‘Hard Knocks’ – with the intensity of ‘Whiplash’ -- it will be sure to entertain and inspire.”

In 1995, Johnson started his career in entertainment with just $7 in his pocket and has since become one of the world’s top-grossing actors with global box office revenue exceeding $5 billion. Garcia began her career in finance with Merrill Lynch Pierce Fenner & Smith before founding a private wealth management firm and most recently, her talent and media firm, The Garcia Companies. Garcia and Johnson combine their creativity and experience to develop high quality entertainment to inspire audiences around the world.

About Fuse
Fuse is a national television network for the wide-ranging tastes and attitudes of the fast-growing, multicultural and Latino 18-34 audience. The network re-launched September 30, 2015, expanding beyond music with original programming that reflects a new attitude that is sexy, edgy, relevant and honest. Fuse is currently available in more than 70 million households, and reaches consumers across multiple other platforms, from video on demand to online, mobile, social media and live events.

About The Blue Devils Drum and Bugle Corps

Music and the performing arts connect youth with their culture through a common language crossing generational, social, and racial barriers. The activities that a young person pursues influences the type of person he or she becomes. The experience that comes with participation in a performing arts organization builds discipline, character, pride, and self-confidence at a crucial age and forms the springboard to even greater achievements in adulthood.