Science and Storytelling: 'From Nothing Until Now' Is a New Kind of Origin Story

Book of Short Stories Tells the History of Life, The Universe, and Everything in a Mashup-Style Caught Between Carl Sagan and Dr. Seuss. 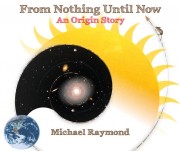 Long Island, NY, July 6, 2015 (Newswire.com) - ​​​​Michael Raymond, an author of young adult science fiction novels, has decided to get real. His new book, a collection of three short stories written for middle-grade and above readers, is not fiction at all. Instead, Mr. Raymond has written a new kind of origin story: A true one.

"Too many people equate science with boredom. I want to make it exciting!" the author says. And he's serious. His new storybook, titled "From Nothing Until Now," is being promoted with the tagline: "The history of our universe. Of life. Of how we got here. It's the greatest story never told in one sitting. Until now." A tall order, perhaps, but one it honestly attempts to live up to.

The book includes the stories of "Earth" (which takes readers from the beginning of time until the formation of our planet), "Life" (the story of evolution), and "Us" (a humanity-centric tale covering the rise of civilization and the discovery of science). Mr. Raymond has made all three short stories in "From Nothing Until Now" available for free on his website and is currently engaging in a Kickstarter campaign to raise money for illustrations.

"Adding illustrations to these stories will make them much more powerful," says the author. "They'll be more fun to read and the illustrations will pull double-duty as visual aids, helping children to better understand the concepts driving the action in the story."

The short-story called "Earth" begins even before the big bang. That doesn't happen until the third paragraph, about a quarter of the way into the story. Instead, the story begins with "nothing," condenses the complex concepts behind the Lawrence Krauss book "A Universe from Nothing"  into a few hundred words. More remarkably, these few words successfully convey some very difficult ideas in language a grade-school child might understand.

"What people often misunderstand about science is that it's not something cold and distant, without heart or soul. It's grown-up puzzle-solving and storytelling, driven by a burning desire to know," Michael says. "We're entering an age when science is becoming ubiquitous, studying society and even morality. It offers new perspectives on all aspects of life. I want to help people understand it, so they are not forced to choose between blind trust and distrust."

Michael adds, "There are many causes worth dedicating one's life to. Those who have been waging war on disease, starvation, and poverty have much work left to them, but they've also made a lot of progress. Their work has set the stage for the next frontier: Education. That's the frontier I want to keep pushing."

The Kickstarter campaign to support "From Nothing Until Now" and help illustrate the book is currently live. The full text of all three short-stories is available on Michael Raymond's website.

About the Author: Michael Raymond is a computer scientist, artificial intelligence researcher, and all-around philosophy/science/technology geek. In his spare time he writes stories that put science in the spotlight.