Over $10,000 in Fine Art Stolen From Valley Artist's Home

Internationally renowned artist Ralph Michael Brekan filed a police report on Sunday, stating that his home in Chandler, Arizona was burglarized the evening of 08/20/2015 while he was away in Pasadena, California on business. 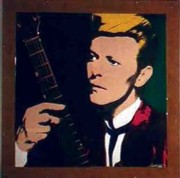 Chandler, AZ, August 24, 2015 (Newswire.com) - The most notable theft of fine art in Chandler, Arizona history has occurred.  Artist Ralph Michael Brekan filed a police report on Sunday, stating that his home in Chandler, Arizona was burglarized the evening of 08/20/2015 while he was away in Pasadena, California on business. Brekan has been living in Pasadena, while working on art, films and stage plays in Los Angeles. Several pieces from Brekan's famed "Pop Portraits" series, created in 1998, were stolen.  Included were colorful mixed media montage portraits of David Bowie, Prince, Elizabeth Taylor and Michael Jackson.

Brekan’s pop art series, “Pop Stars” was unveiled at Arizona State University's Memorial Union art gallery in October of 1998 to much critical review.  The series went on to exhibit nationwide through the turn of the millennium. Several of the works from the series are in the private collections of famous artists and musicians, as well as notable public collections, including Musee Artcolle, the International Museum of Collage, in Sergines, France.

Other art stolen from Brekan's private collection included an original pop-art painting of Albert Einstein, by Warhol progeny Steve Kaufman, and a decoupaged fine art, toilet seat, featuring the seminal 60's rock band "The Doors,"  created by the late Valley eccentric Erastes Cinaedi. The total value of the stolen artworks are estimated at over $10,000.

Brekan, who splits time between Phoenix and Los Angeles, was informed of the burglary by his realtor.  The home is currently on the market and in escrow.

Unquestionably the largest theft of private art in Chandler, Arizona's history, it is unclear what will become of the missing art. Brekan, who intended on exhibiting the portraits in a 20 year retrospective, hold's optimistically the works will be found. "It's not like they are generic oils on canvas," Brekan says, "these are unique, cutting edge art works that will be hard to trade in the open art market. Someone, somewhere, will see them on exhibit during my lifetime, I'm sure of it."  What is certain is the recovery rate for stolen art, averaging about 1.5% of all documented thefts globally.

Ralph Michael Brekan lives in and works in Pasadena, California and Phoenix, Arizona. His artwork is represented by commercial galleries and is included in the permanent collections of museums worldwide, including the International Museum of Collage, The Schacknow Museum of Fine Arts, and Musee Artcolle in Sergines, France. Ralph Michael Brekan is currently a production designer in Hollywood and his website can be found at www.MyAwesomeArt.com.  He also can be reached at Ralph@brekanarts.com.