MapsWithMe Rebrands to MAPS.ME and Goes Through the Major Update

MapsWithMe GmbH announces that MapsWithMe app undergoes rebranding, changing its name to MAPS.ME and going through major improvements to the app. 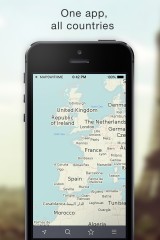 MAPS.ME comes with the new address search. It is now possible to search for necessary places not only by their names, coordinates or keywords (e.g. museum, sights, etc.) as it used to be before, but also by their street address. These improvements are intended to hasten and simplify the process of finding necessary places on the map.

MAPS.ME users will benefit from important changes of the app user interface. We added menu buttons to the main screen and made it possible to view all search results on the map.

“When making a decision to rebrand the app, we were guided by the principle ‘Simplicity is perfection.’ MAPS.ME is not only easier to pronounce for our non-English-speaking users, but also more appealing. New user interface and search improvements are two great steps on our journey to make perfect mobile maps,” said Yury Melnichek, MAPS.ME CEO and founder.

MAPS.ME provides offline maps of all countries for iOS, Android and BlackBerry on the base of OpenStreetMap data. The first version of the app was released in 2011. Since then, more than 4 million people from the whole world have installed MAPS.ME. The app is among top travel apps in almost all countries.