Analyn Cruz of Los Angeles, California has won $5,000 playing a free instant win sweepstakes game on Winloot.com. Ms. Cruz matched ten out of eighty numbers making her one of over 3,000 winners on Winloot.com so far. 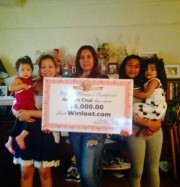 Roslyn, NY, July 30, 2015 (Newswire.com) - Analyn Cruz of Los Angeles, California has won $5,000 playing a free instant win sweepstakes game on Winloot.com.  Ms. Cruz matched ten out of eighty numbers making her one of over 3,000 winners on Winloot.com so far.

Ms. Cruz had been a member of Winloot for less than two months when she hit the big prize and was the first $5,000 winner on the newly launched instant win game.  The free instant win game has proven to be a big hit with Winloot sweepstakes players.  Users pick ten numbers out of eighty and the game randomly chooses twenty.  If a user matches at least eight numbers they win a cash prize instantly.

Ms. Cruz stated that she “…was completely shocked and had tears of joy…” upon realizing she had won the big cash prize.  When asked what she would tell others about the Winloot sweepstakes she commented “A lot of people did not believe it, but I just told them, even my family and friends, that it was true! It could happen to you too, keep entering and don’t give up.”

CMO Matthew Gately noted that “Winloot.com is extremely pleased to have our first $5,000 instant winner and expect many more winners to join our over 3,000 winners so far.  Winloot.com is set to launch even more sweepstakes opportunities and is looking forward to even more and bigger winners!”

###
Winloot.com is a 100% free sweepstakes site that was founded in 2014 by ex-Publishers Clearing House employees. The site has attracted nearly 1,000,000 members and features two free games including a sweepstakes with prizes ranging from $100 to $1,000,000 and the instant win game where users can win $10 to $5,000 instantly.  Winloot.com has a guaranteed cash winner of at least $100 every day and has awarded more than 3,000 cash and merchandise prizes to date.​

Winloot is a 100% FREE Sweepstakes. Registered users can play 15 lotto style sweepstakes games ranging from $100 to $1,000,000 every day. Winloot offers other giveaway opportunities like a guaranteed daily winner sweepstakes.