"Check Point" will have an impact on an awaiting audience at Comic Con in Santa Fe, New Mexico, as it makes its world trailer premier Saturday, October 24th (currently scheduled for 3PM in Room A) as well as it's online world wide trailer release later that evening. Attending the event will be Director Thomas J. Churchill and WWE legend Bill Goldberg to promote the highly anticipated film. 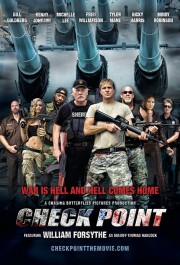 Los Angeles, October 22, 2015 (Newswire.com) - ​​​​​Comic Con is an incredible and exciting pop-culture convention held all over the country with a show floor that plays host to the latest and greatest in comics, graphic novels, anime, manga, video games, toys, movies and television.  "Check Point" will be at the top of everyone's list.

Goldberg plays T.J. a major role in the film and brings both his screen acting abilities and his diverse fighting techniques, all of which add to the dramatic action of the story line.  Other incredible additions to the cast include experienced actors such as Kenny Johnson, (Bates Motel, Sons of Anarchy) William Forsythe, (The Rock, Raising Arizona) Michelle Lee (Pirates of the Caribbean: At World's End, Pacific Rim) and many more.

“Check Point” is set in the mood of today's headlines when a vagrant discovers a sleeper terrorist cell is in a small town where everyone knows one another, or so they think they do. Justice seems lost, as an insurgent attack is threatening to escalate into a full-blown US invasion, a team of unlikely heroes must rise up to fight the enemy and protect their country from the most unlikely enemy "ourselves"... Facing the obstacles of a closed-knit community, they each find inner strength and determination as their only choice.  Whether an insurgent sleeper cell, or a lone individual with a gun, heroism is seldom sought out, it merely is the way someone finds the depth of character to do the right thing, at any cost.

As Comic Con introduces the "Check Point" trailer to those lucky enough to be at the Buffalo Thunder Resort and Casino for the showing, they will only be more enticed to see the entire film as it unveils a dramatic journey of newly formed alliances and their commitment to their country above all else.  All will be anticipating  its scheduled opening Memorial Day weekend of 2016.