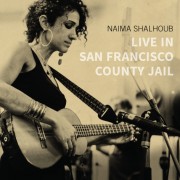 Oakland, CA, December 10, 2015 (Newswire.com) - "Live in San Francisco County Jail" is a debut record by Naima Shalhoub recorded live inside SF County Jail #2 (CJ2) who spent a year and a half voluntarily facilitating weekly music sessions at CJ2 with incarcerated women. The recorded concert was also tribute to incarcerated mothers as it occurred on May 5th, 2015 during Mother's Day week.

While building relationships and facilitating the sessions on the inside of CJ2's B-Pod, the idea was born to couple Shalhoub's desire to record her first album with bringing awareness to the larger issue of mass incarceration of women by recording a live album during mother’s day week. Shalhoub received approval from the San Francisco Sheriff's Department and overwhelming encouragement for this project from incarcerated women and staff such as Angela Wilson, program coordinator of B-pod. The record will give 50% of its profits to support incarcerated women through social programming and re-entry programs.

The album contains 19 tracks: 10 music tracks and 9 speaking tracks including story-telling and poetry. The music includes Shalhoub's arrangement of the Civil Rights spiritual "Keep Your Eyes on the Prize", Billie Holiday's "God Bless the Child", an Arabic folk song, several originals and others. The speaking tracks features poetry by incarcerated women, performance by Goddess of Ceremonies Rhodessa Jones, director of The Medea Project: Theater for Incarcerated Women, and others. Two songs also feature, respectively, Marcus Shelby, bassist and composer, as well as Tarik "Excentrik" Kazalah, multi-instrumentalist and MC.

Girls and women in the criminal justice system matter. The percentage of women that are incarcerated in the U.S. has gone up 900%. The United States is now the highest incarcerated country in the world, holding 33% of the world's women prisoners. Along with recording quality music, Naima would like to use her music as a tool to join the larger conversation about mass incarceration and the injustice of the prison system as more and more people are speaking out about this including artists such as John Legend.

The recorded concert on May 5th was covered by local and national press such as San Francisco Chronicle, SF Weekly, KQED Arts, East Bay Express, AJ+, NBC Bay area and others. The album was recently released on December 1st, 2015 and we are welcoming those interested in covering the album and project further. Please let us know if you are interested or if you have any questions. Please visit the Bandcamp link or Naima Shalhoub's website to listen to the record, watch the short music video documentary titled "Borderlands" on YouTube, and/or write to request a hard copy for review.

Photography by Sarah Deragon, Portraits to the People/ Graphic Design of album cover by Jonathan Holt.