Antibiotics Levaquin, Avelox and Cipro May Cause Permanent Nerve Damage

New FDA warning states that Levaquin, Avelox and Cipro could cause serious permanent nerve damage. Who is at risk? 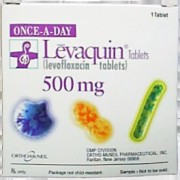 September 15, 2014 (Newswire.com) - The U.S. Food and Drug Administration (FDA) has announced that it has strengthened its warning on antibacterial fluoroquinolone drugs such as Levaquin, Avelox and Cipro. The FDA warning states that the drugs could potentially cause permanent nerve damage called peripheral neuropathy.

Peripheral neuropathy, which is a serious form of nerve damage, may affect one nerve (mononeuropathy), two or more nerves in different areas (multiple mononeuropathy) or many nerves (polyneuropathy).

A study conducted over 10 years and published Neurology in Aug., 2014, shows that users of fluoroquinolone drugs such as Levaquin, Avelox and Cipro, are at a higher risk of developing peripheral neuropathy. The study advises that doctors should weigh the benefits against the risk of the drugs when prescribing them to patients.

Each year in the United States, more than 6 million people are prescribed Levaquin (levofloxacin). Levaquin is made by Ortho McNeil Janssen Pharmaceuticals and is prescribed usually to treat respiratory infections, as well as bacteria and skin infections, pneumonia and bubonic plague. The drug was approved by the FDA in 1996 and made available as a generic drug in 2011. Levaquin had sales of $1.3 billion in 2010.

Peripheral neuropathy starts in the longest nerves, which are the nerves that reach to the toes, causing the feet or hands to go numb and may spread into the arms and legs. The symptoms may vary, depending on which types of nerves are affected.

Signs and symptoms may include:

•  Gradual numbness and tingling in feet or hands, which may spread into legs and arms

•  Muscle weakness or paralysis if motor nerves are affected

If someone has suffered nerve damage while taking Levaquin, Cipro or Avelox they may be entitled to compensation.

To learn more about how fluoroquinolone antibiotics such as Levaquin, Cipro and Avelox can cause dangerous nerve damage and if someone is entitled to compensation visit AntibioticNerveDamage.com.

Xarelto May Lead to Dangerous Bleeding Complications
Xarelto may cause irreversible internal bleeding that can lead to hospitalization and death. What are the risks?
Gold Shield Group - Sep 16, 2014
Newswire