AZ Everything Jewish is launching a website to enlist the American people to join together as modern day Maccabees. This action supports the people of Israel living in the biblical lands of Judea and Samaria who are trying to live productive lives, at the tip of the Islamic sword. 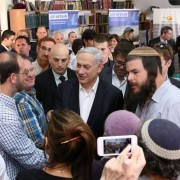 Phoenix, AZ, November 24, 2015 (Newswire.com) - Last week, the Pope, the ultimate symbol of peace, declared that we have already witnessed the initiation of World War III.  All people of peace are angered and traumatized by the increasing tempo of this war.   There has been little or no action by governments to address the acts of war that have occurred, most recently in Paris, but also in many other corners of the world. Governments, especially our own, ponder and appease – why? We leave it up to you to answer that question.

But if our government is failing to act, does that mean that there is nothing we can do?  If American freedoms mean anything, they mean that we, as citizens, are not bound by our government’s inaction.  And, as Americans, we are stepping up to the plate, hopefully before it’s too late, just as the Israeli Maccabees did millennia ago.  The Maccabees, at the time that is celebrated today as Hanukkah, rose up to combat the oppression and denial of religious freedom imposed by the Seleucid Dynasty’s  occupation of Israel.  Interestingly, the Books of Maccabees, which tell the story of Hanukkah, weren’t included in the Hebrew Bible – but are in the Catholic Bible.  The Maccabees knew that the time to just wait for a return to normalcy was over.

Having witnessed the senseless, cold-blooded murders in Paris, the ‘illusion’ that one can appease a poisonous serpent has proven once again to be the wrong approach. Americans are sick and tired of sitting on the sidelines and waiting for the Government to recognize what are acts of war.  What is incorrectly referred to as terrorism, is in reality the teachings of Islamic Fundamentalism ... a cancer that must be directly confronted and immediately ripped out.

But what can a citizen do?  We can support those who are at the forefront of the battle to preserve civilization.  There has been one 9/11 in New York, one 7/7 in London, one 11/13 in Paris, one attack in Mali, one in Kenya, etc. etc.  But there is one place, Israel, where these attacks have happened continuously for more than 100 years.

We are launching our website to enlist the American people to join together as modern day Maccabees. This action supports the people of Israel living in the biblical lands of Judea and Samaria who are trying to live productive lives, at the tip of the Islamic sword.  They have long experienced what we, without a doubt, are experiencing right now… trying to survive in the constant cross-hairs of a terror-based conflict which has now spilt onto our shores.

These brave people have revitalized the lands of Judea and Samaria and deserve our support, not just to survive, but also to prosper… while at the same time we can enjoy the fruits of their labor.  We urge that you visit our website, www.AZEVJ.Faith   and listen to Nati Rom of the Lev HaOlam (Heart of the World) Package Project and understand why we are so enthusiastic about the opportunity to assist and support those brave and deserving people.  So little can provide so much

We are launching our website to enlist the American people to join together as modern day Maccabees.