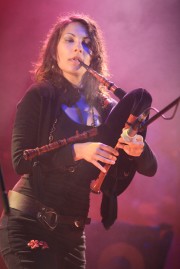 Macerata, Italy, June 30, 2015 (Newswire.com) - ​​​​The Montelago Celtic Festival’s tirteenth edition takes place this year on the alpine plains of Colfiorito in central Italy from 6th-8th August, featuring The Rumjacks from Australia, Galicia’s Mercedes Peòn, and Corvus Corax from Germany among the festival’s 20-concert programme. This year also introduces the European Celtic Contest for the first time, pitting Europe’s best up-and-coming artists against each other for the promise of performing at Italy’s leading Celtic festivals in 2016.

After its launch in 2003 on the fields of nearby Montelago, the festival moved several years ago to its current site at the location of Taverna in the municipality of Serravalle di Chienti on the border of the Italian regions of Le Marche and Umbria. Over the years the festival has developed into Italy’s largest Celtic festival, and today attracts over 20,000 enthusiasts as part of the growing “Montelago community.”  The event is supported by several government entities from the regional level down to local municipalities, and enjoys the patronage of the Irish Embassy in Italy. More recently it has attracted the attention of the Italian government’s Ministry of Youth and the BBC thanks to its unique and diverse mix of high-quality cultural and social events.

This year’s music performances kick off at 20:30 on Thursday 6th in the Mortimer Pub with the European Celtic Contest, and pick up again at 15:45 on Friday, after which the music will run continuously in the 600m² marquee and then the Main Stage until the early hours of Saturday morning. After 8th August’s first concert in Mortimer Pub at 11:30, sounds will continue to fill the tent throughout the day, transitioning at 21:00 to the Main Stage, where festivities will last until sunrise on Sunday. Having attracted celebrated Celtic performers such as Hevia (Spain), Kila (Ireland), the Peatbog Faeries (Scotland), and Berrogüetto (Galicia) in previous editions, this year’s lineup features 14 groups from Australia, Spain, Germany, the Netherlands, and Italy.

In addition to musical entertainment, there are also Celtic games (such as tossing the caber), traditional Celtic craft, music and dance workshops, a 7-a-side rugby tournament sanctioned by the Italian Rugby Federation, paragliding flights, fantasy literature presentations, a Celtic village recreation, Celtic weddings, and a Celtic market with 70 stalls offering crafts, clothing, and curiosities. Also, for the second year, the festival is preceded by Appennino Tartan, a four-day trek in the footsteps of St. Francis across the mountains from Assisi to the festival.

On site are expansive camping areas including a separate, cordoned-off area for families with children – along with a baby park offering child care and fun, educational activities – food and beer stands, a large illuminated parking area, field hospital, chemical toilets, free wifi, phone-charging totems, and a “refreshing point” offering sprays of cool water in the August heat. ViaggiPerConcerti will have scheduled bus services from Italy’s major cities direct to the festival, and a shuttle service runs at regular intervals from Foligno station in Umbria to the festival. Entrance for the weekend costs 25 euro on Thursday and Friday 6th, 7th August, and 20 euro on Saturday 8th.

The festival is organized by Arte Nomade.