Despite the fact that many of these cups are marketed as "disposable" and "recyclable," very few are actually being recycled. Instead, they're ending up as an ever-growing mountain of trash, who should be responsible for this breach of trust? Consumers? Manufacturers? Small boutique coffee shops or the giants of coffee chains? 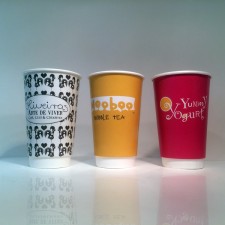 Northampton, England, June 30, 2017 (Newswire.com) - When asked about who should be held responsible for the non-recycled paper cups that go into landfill, Leslie Carr of Scyphus had this to say to us. Read more on their take on recycling at their plant here.

Joe Somebody has just downed the last drop of his double shot latte. Right into the recycling bin.
Joe's part in saving the planet is done for the day! Wrong. As a nation of coffee addicts, Brits are buying around 10,000 cups of coffee every two minutes. That's seven million cups a day — or 2.5 million a year.

Last year, it was revealed that despite the fact that many of these cups are marketed as "disposable" and "recyclable," very few are actually being recycled. Instead, they're ending up as an ever-growing mountain of trash.

That's right: many of those coffee chains who claim to be recycling their paper cups are, in fact, contributing to the waste problem as much as anyone else.

Is That Paper Cup Going To Be Recycled?

When we purchase a beverage in a paper cup, we naturally assume that we've made an eco-friendly choice.

Turns out that many coffee chain giants are keeping a big secret: a used coffee cup is going straight to the dump. Takeaway cups are used by the biggest names in the business such as Starbucks, Caffe Nero and Costa.

Starbucks alone sells 4 billion cups worldwide each year. On any given day, thousands of work-going folk can be seen gripping these cups as they head down the street. But guess what? Many of these "green" cups aren't recycled.

In 2008, Starbucks made an amazing promise: that they would offer recycling at all of its company-operated branches by 2015. This, of course, made them look pretty good and no doubt generated a whole lot more business.

Just five years later, Starbucks admitted that it wasn't going to meet its recycling goals at all. Worse still was the revelation that it had only managed to implement customer recycling at 39 percent of its company-operated stores. Starbucks aren't the only ones at fault. Costa claim to have the world's most recyclable paper coffee cup with the slogan "great taste without the waste." But, like Starbucks, the rate at which Costa coffee cups are recycled depends on the facilities available. And they just aren't working.

Why Is it So Hard to Recycle a Paper Cup?
The reality is — it's not. It's a matter of getting companies to do it.

The problem, it seems, is that paper cups used by Starbucks and other major coffee chains are lined with PE plastic to make them waterproof. While these cups are definitely 100 percent recyclable, that plastic needs to be removed in a separate process before the cups can be broken down and made into new paper. This separate recycling process is in operation throughout U.K. and Europe.

However, the companies running it say they require a certain volume of cups to justify it.

PE Cups: The Extra Step
Polyethylene — or PE — is the type of plastic most commonly used around the world for plastic bags, packaging and containers. It's also used as a coating on paper cups to prevent them from leaking when a hot beverage is poured into them.

Although PE is indeed recyclable, the fact that it is petroleum-based prevents it from being biodegradable.

PE-lined cups must go through a recycling process separate to other recyclables. In the U.K., there are only two of these recycling facilities. It's reported that one of these facilities has only ever processed a small number of paper cups, while the other is yet to recycle a single one. Of course, it's not entirely the fault of the coffee chains.

Many city councils are put off by the idea of the separate recycling process, so the cups are instead sent to landfill or incinerated. Even when separate bins are provided, contamination happens all the time. In the end, it's just easier to send the whole lot to the tip.

So, Should We Stop Using Paper Cups?

Absolutely not! A disposable paper cup is still far less harmful to the environment than a plastic cup.

Plastic cups, however, take years and years to break down completely.

Paper, of course, is a natural product that leaves no toxic residue when it breaks down. Plastic is the biggest problem in our landfills, and one of the major threats to our environment — and our future. Consumers can also play a part in the rate at which paper cups are recycled.

Putting used cups in the recyclables bin is definitely a good start! Don't throw it amongst the other trash. Separate bins for recyclables are present in most towns and cities, and throwing cups in the right one can make a huge difference. Another option is to support coffee chains that use PLA cups: read on!