Raz Mason is poised to change the impact of American politics. The "Raz Mason for Oregon" campaign today announced an upcoming press conference on Nov. 8, 2019, 3 p.m. in Bend, OR, on the OSU Cascades campus, simulcast on Facebook, @RazforOregon. 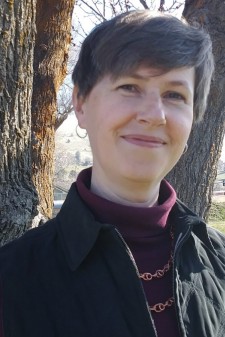 KLAMATH FALLS, Ore., November 1, 2019 (Newswire.com) - With U.S. Representative Greg Walden (R) leaving political life, the focus of the race has shifted to Raz Mason, who is seeking the Democratic nomination in Oregon’s Congressional District 2. Mason is confident her multifaceted background and sharp focus on comprehensive climate solutions will propel her campaign while contributing to the national conversation.

Mason’s campaign and childhood roots are both in the expansive 2nd Congressional District of Oregon, a district larger than the state of Florida. Her diverse background includes a degree in mathematics; many years’ work in the domestic violence field; long-haul truck driving; and a master’s degree in divinity from Harvard (on a full scholarship). As a STEM educator, middle and high school teacher, trauma-informed interfaith chaplain, and co-founder and executive director of the nonpartisan CO2 Foundation (a cutting-edge climate change education organization), Mason understands the challenges facing Oregonians and America.

Raz Mason describes herself as a “deep-purple Democrat,” who champions progressive policies while building bridges among liberal, independent, and conservative voters. Leading a positive, issues-based campaign that confronts the pressing challenges of today is at the core of Mason’s strategy. Bringing everyone together in 2020 is paramount for creating a sustainable economy and Earth.

Mason’s campaign highlights what she calls trauma-informed politics: “After working in education and health care, where trauma-informed practices support caregivers and educators to understand how unresolved traumatic experiences influence people’s behaviors, I realized the same needs and supporting tools relate to politics,” says Mason. “Trauma arises when a person’s nervous system gets stuck in the fight, flight, or freeze response. Often, that leads to high reactivity and fearful over-simplification--the opposite of what we need in our complex world.”

“Our climate crisis brings accelerating dangers: rising seas; harm and monetary costs stemming from natural disasters; and public health problems from heat waves, wildfire smoke, and a greater threat of pandemic diseases. An August 2019 report from the Pentagon spelled out the risks of mass climate migration, civil conflict, power grid failure, and agricultural collapse that can lead to tremendous suffering and destabilization of the global economy.”

“21st-century politics is an “all hands on deck” enterprise requiring the best of everyone,” asserts Mason. “That means ongoing learning across the board, in fields we used to think of as someone else’s responsibility."

As a science teacher, Mason knows that healthy ecosystems are bio-diverse: "Our country’s ability to respond with shared wisdom and courage enables us to bounce back from current and upcoming climate challenges," says Mason. "Resilience grows through a diverse socio-political ecosystem that draws on the gifts and perspectives of rural and urban Americans alike.”

To support the campaign, visit Raz Mason for Oregon at VoteRaz.com or ActBlue.com.

About Raz Mason for Oregon

As a deep-purple Democrat, Raz builds bridges with independents and conservatives, while being a champion of progressive politics. 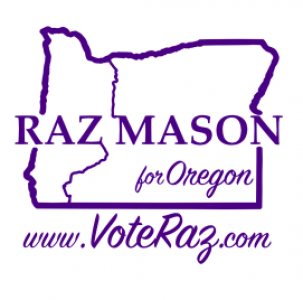