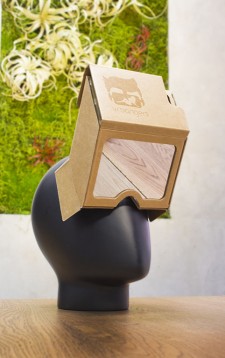 LOS ANGELES, March 2, 2018 (Newswire.com) - Today, the adult virtual reality entertainment company VR Bangers announced their plans to immediately expand into the augmented reality (AR) market. This announcement coincides with the release of images of a lightweight and cost-accessible AR headset, similar to Google Cardboard, to be used with mobile devices via the company’s online streaming service. Support for other AR prototype headsets will be announced in the coming weeks, as in-house testing is still in progress.

The company has also announced that it will be filming its first, and the first of its kind, AR adult video by the end of this month. While other adult VR entertainment companies have made minor forays into the augmented reality sector, many have maintained that it would be too costly or that the market and technology simply wasn’t there to make truly immersive AR experiences. To solve these challenges, VR Bangers partnered with domestic and international startups to produce true-to-life AR content filmed directly from live actors using 360-degree volumetric capture data.

While volumetric capture techniques are not new to the special effects and mainstream film industry, VR Bangers’ partner companies have made significant advancements in the application of the technology, specifically for augmented reality. To demonstrate, the company has released a short screen test that demonstrates real-time updating in 360 degrees and their plans to film a full-length film next month.

If the content goes to a full public release, it is likely that it will be restricted to mobile support since AR requires a functional camera to capture the surrounding environment, but VR Bangers CEO Daniel Abramovich teased that the company may have more up its sleeve. “We’re working with a lot of promising startups making very interesting moves in the field," he said in his Friday statement. "The adult industry has been instrumental in driving the VR market since it has garnered the support of millions of users interacting with video content on a daily basis. That’s allowed us to put funding and efforts into supporting other innovators that are looking to take the AR market by storm. With the introduction of true AR adult videos, we’re expecting to see the same boom that will continue to push the technology forward.”

A company representative further explained that the current wave of AR prototype headsets have been somewhat limited and function more like a standard VR headset, but VR Bangers’ goal is far beyond that. “We’re planning content geared for more complicated headsets,” Abramovich added. “Something more along the lines of the Oculus and HTC Vive. The AR experience we’ll be providing is wildly different from VR in that the viewer will be able to physically move around the space and interact with the actor in the scene. It will be a complete 360-degree experience in real time in a semi-real environment. I think it’s going to completely change the game.”

Leading the charge into the adult AR market, the company has positioned itself to be at the forefront of the emerging industry and continue to create new and engaging experiences that push the boundaries of the medium. For the time being, we’ll have to wait for this year’s trade shows to see what the company has planned.