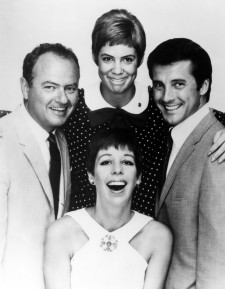 ROCKPORT, Mass., December 28, 2020 (Newswire.com) - The Film Detective (TFD), a classic media streaming network and film archive that restores and distributes classic films for today's cord-cutters and is now wholly-owned by Cinedigm (NASDAQ: CIDM), is dedicating the upcoming month to the lighthearted side of cinema. In a time of increased demand for at-home entertainment, The Film Detective is delivering the nostalgia of film’s favorite comics throughout the entire month of January.

Kicking off The Film Detective’s month of comedy will be a 48-hour New Year’s Laugh-a-thon, on New Year’s Eve and New Year’s Day. Laugh along with such timeless jokesters as The Three Stooges and Groucho Marx, starting at 12AM ET on Dec. 31.

The New Year’s Laugh-a-thon will also feature The Film Detective debut of The Carol Burnett Show (1967-1978) and The Marx Brothers TV Collection (1951-1976), courtesy of Shout! Factory.

Keeping the laughter going throughout January will be actress Betty White, celebrating her 99th birthday on Sunday, January 17. The Film Detective will recognize the decades of entertainment White has brought to audiences on her birthday with a marathon of her first comedy sitcom, Life with Elizabeth (1953-1955).

“I am thrilled to reach this acquisition agreement with Cinedigm, which will give The Film Detective the firepower to grow our content library and streaming channels much faster than before,” said Phil Hopkins, The Film Detective Founder and CEO. “Cinedigm has been a long-term independent leader in quality content distribution and streaming and I believe their capabilities will help take this business I have built over the years to an even higher level.”

The Film Detective is a leading distributor of restored classic programming, including films, television, foreign imports, and documentaries. Launched in 2014, The Film Detective has distributed its extensive library of 3,000+ hours of film on DVD and Blu-ray and through leading platforms including TCM, NBC, EPIX, Amazon, MeTV, and PBS. The Film Detective has released its classic movie app on web, Android, iOS, Roku, Amazon Fire TV, and Apple TV and is offered live on Sling, STIRR, Plex, and DistroTV.

For more than twenty years, Cinedigm (NASDAQ: CIDM) has led the digital transformation of the entertainment industry. Today, Cinedigm entertains hundreds of millions of consumers around the globe by providing premium content, streaming channels and technology services to the world’s largest media, technology and retail companies.

Fandor Announces Sponsorship at North Fork TV Festival
Fandor to attend first in-person festival since its 2021 acquisition by Cinedigm, ahead of the upcoming relaunch of the Fandor app and digital publication Keyframe
The Film Detective - Jul 28, 2021