Serious Theater in Oregon Announces the Off-Broadway Play - The King, The Final Hours - Will Open Their 2020 Season 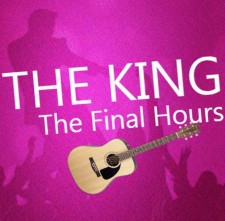 THE DALLES, Ore., September 9, 2019 (Newswire.com) - ​Serious Theater has announced the Off-Broadway theatrical play, The King, The Final Hours will open their 2020 season in The Dalles, Oregon.

The King, The Finals Hours is an intimate and artistic interpretation of what went through Elvis Presley's mind during his final hours on earth.

This is the first theatrical play to explore these themes. This play is not affiliated with Elvis Presley Enterprises.

The artistic director of Serious Theater, Garry Estep, says fans will hear famous songs that Elvis performed throughout the 1950s, 1960s and 1970s. They’ll also get an up-close and personal look at some of the internal conflicts Elvis faced throughout his life.

“Most stories on Elvis water down the personal struggles he faced throughout his life,” said Estep. “But at the root, Elvis was a man with personal flaws, just like all of us. He was in love with two women at the same time. He was raised in a deeply religious home in the South, making his temptations that much more personal.”

“In the end, we will all look back and reflect on life and the people who mattered most to us,” said Macias. “In his final hours, Elvis has private conversations with the women who mattered most in his life. He tells Ann-Margret how he really feels about her; he talks to God and questions his Mother about her decisions. Elvis also opens up to Priscilla Presley about some of his failings.”

Macias said most people don’t know Elvis was in love with two different women - an innocent, underage teenager and the biggest movie star of the day. The play explores the internal conflict he faced as he was forced to choose between two women he loved.

Macias will be at the play’s opening in March 2020, answering questions from the audience and giving his personal interpretation of the play. The show’s opening date hasn’t been set yet, but The King, The Final Hours will open the season.

“Last year, we had people from all over Oregon travel to watch The War of the Worlds at our theater,” said Estep. “We believe The King, The Final Hours will provide another unique opportunity for Oregonians to relive history and experience a show that will open their minds."

About The King, The Final Hours

The King, The Final Hours is the first Off-Broadway performance to explore Elvis Presley’s final hours on earth. In his final hours, he revisits the women he loved most, reflecting on what could have been. Viewers will also follow the King as he makes his way through historical and pivotal moments in monumental times that shaped his personal life as the most famous man in the world.

The King, The Final Hours is available for licensing. Theaters interested in reviewing the script, or watching the show’s play in New York City can contact info@thefinalhours.com.

The playwright, Mark Macias, is an Emmy-award winning producer and storyteller. He's a former Executive Producer with NBC and Senior Producer with CBS in New York. His TV peers nominated him with 5 Emmys and awarded him one Emmy in News & Public Affairs. Macias now runs his own Public Relations firm - MACIAS PR, which was named 2015, 2016, 2017 and 2018 “Financial PR Firm of the Year” and “Strategic PR Firm of the Year” by marketing peers and journalists. He’s also the author of the business book, Beat the Press: Your Guide to Managing the Media.