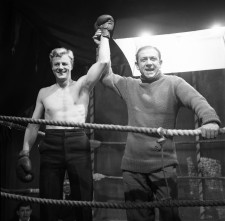 ROCKPORT, Mass., February 26, 2021 (Newswire.com) - The Film Detective (TFD), a classic media streaming network and film archive that restores and distributes classic films for today's cord-cutters and is wholly owned by Cinedigm (NASDAQ: CIDM), is bringing some mania to its March lineup.

Every Saturday on The Film Detective live channel, sports fans can tune in for wrestling matches from the 1950s, where the world's foremost wrestlers will return to the ring, including Killer Kowalski, Yukon Eric, Billy "Red" Lyons, and Hans Schmidt. Adding even more fight to the Saturday night lineup will be At Ringside with the Rasslers, a rare 1950s program taped at the famous Hollywood American Legion Stadium.

Joining the mania this March will be classic fighter films on The Film Detective app from wrestling and boxing titles like Jimmy Durante's Palooka (1934) and Bad Blonde (1953) to martial arts classics like Bruce's Deadly Fingers (1976) and Death Duel of Kung Fu (1979).

While fans eagerly await the return of seeing their favorite teams at live events, sports fans of all varieties will have something to cheer about from home on The Film Detective app, with high-energy made-for-TV dramas like Dallas Cowboys Cheerleaders (1979) starring Jane Seymour and Coach of the Year (1980). Star athletes from yesteryear will also make appearances throughout the month, including baseball star Joe DiMaggio in Manhattan Merry-Go-Round (1937), swimmers Johnny Weissmuller and Buster Crabbe in Swamp Fire (1946), and football star Fred Williamson in Mean Johnny Barrows (1975).

Adding to the mania will be March movie marathons on The Film Detective channel, including a tribute to the uncrowned king of education and training films, Jam Handy, on March 6. If viewers don't recognize him by name, they will certainly recognize the Jam Handy Organization founder's industrial, military, and educational films, used by everyone from General Motors to local classrooms, which will be featured alongside the satirical Jam Handy to the Rescue! (2011).

The celebrations will continue throughout the month with a St. Patrick's Day movie marathon, featuring a spotlight on esteemed Irish actress Maureen O'Hara on March 17. Viewers will also be able to celebrate the start of Passover with Gertrude Berg and The Goldbergs (1949-1957) on March 28.

New arrivals coming to The Film Detective in March will include features from Mystery Science Theater 3000 (1988-1999) and Elvira's Movie Macabre (1981-1993). Two of The Film Detective's most beloved classics, Swing High, Swing Low (1937) starring Carole Lombard and Fred MacMurray and the classic Pre-Code drama Bird of Paradise (1932), will get the royal treatment with beautiful new restorations, available in March.

The Film Detective is a leading distributor of restored classic programming, including feature films, television, foreign imports, and documentaries and is a division of Cinedigm (NASDAQ: CIDM). Launched in 2014, The Film Detective has distributed its extensive library of 3,000+ hours of film on DVD and Blu-ray and through leading broadcast and streaming platforms including TCM, NBC, EPIX, Amazon, MeTV, PBS, and more. The Film Detective has released its classic movie app on web, Android, iOS, Roku, Amazon Fire TV, and Apple TV and is available live with a 24/7 channel on Sling, STIRR, Plex, and DistroTV. For more information, visit www.TheFilmDetective.com.