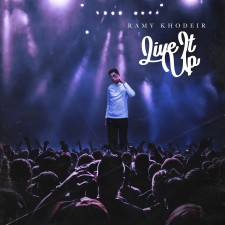 LOUISVILLE, Ky., September 15, 2019 (Newswire.com) - Ramy Khodeir is an enterprising musician out of Louisville, Kentucky, determined to increase his visibility in the hyper-competitive world of hip hop. He continues this trajectory with his new EP, “Live It Up.” Over the course of “Live It Up’s” roughly fifteen-minute runtime, each track manages to stand out as a triumph of both production values and lyrical eloquence. The album is masterfully produced by Khodeir himself which helps deliver a personal touch in accenting his lyrical acuity and distinctive sonic persona. The meticulous degree of care put into “Live It Up” makes it sound like the work of a prolific professional, which only makes its independent status all the more impressive.

Each track provides a sound that is at once sonically fresh, yet thematically consistent with the ones before it, maintaining a clear and feel-good theme of finding one’s own value from within. The EP’s poignant intro track, “Up Now,” is essentially its thesis statement; making a clear point that now is the time for listeners to chase their dreams and make the most of their lives. The track comes hot out of the gates with hard-hitting bars and a consistently escalating beat underscoring it. Compare this with the third track, “Know Me,” which boasts a more subdued beat and an air of braggadocio as Ramy flexes on doubters and naysayers. The commendable degree of effort, as well as clear passion, put into this project makes it a promising next step in Ramy Khodeir’s career. “Live It Up” is available now on all major streaming platforms.

Ramy Khodeir has been musically inclined for the vast majority of his life. Growing up, he was a gifted student of both the violin and piano. Come his high school years, however, artists like Lil Uzi Vert would inspire him to try his hand at pursuing the genre he was always most adamant about: Hip hop. He grew quickly enamored with the craft and soon after made crafting an original voice for himself priority number one. He prides himself on his originality as an artist that spreads positivity through an uplifting and encouraging message – one which is free of pessimism or profanity. This, combined with a contemporary sound, allows Ramy to cast a wide net on his audience, whilst simultaneously communicating hope and motivation.