After a horrific car crash, multiple surgeries, and an extensive recovery period, Gabe Hurley was given another chance at life. The American Society of Plastic Surgeons recently presented Gabe Hurley with the Patients of Courage Award, and recognized Dr. Patel of The Plastic Surgery Center for his surgical talents. The award came with a monetary grant which Gabe donated to Robert Wood John Hospital Level 1 Trauma Center's Safety Ambassador Program. 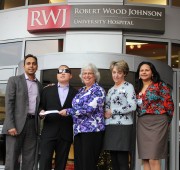 Shrewsbury, NJ, February 22, 2016 (Newswire.com) - Gabe is an accomplished guitarist and a motivational speaker who strives to encourage others through his music and presentations. That’s despite Gabe’s sudden blindness, months in a brain trauma unit and having undergone 12 surgeries to have his face reconstructed from a horrific car crash; a crash that wasn't Gabe’s fault.

Gabe was driving to a pharmacy one night six years ago when an oncoming car driven by a teenager, slammed into the bridge. The force of the crash hurled the car’s 20 pound radiator through the windshield of Gabe’s car, resulting in catastrophic injuries.

When Gabe awoke from a coma, he was blind and unable to speak; his jaw had been wired shut. He communicated by writing, but could not see what he wrote. Gabe endured multiple procedures, one requiring nearly 20 hours to perform, where plastic and reconstructive surgeon Dr. Tushar Patel of The Plastic Surgery Center reconstructed Gabe’s face, which at the time of the accident was almost unrecognizable, using bone from his rib and skull. Through the following 8 procedures, surgeons were able to repair bones in his left hand, eventually allowing Gabe to relearn the guitar and continue playing in his band. Dr. Patel was there through Gabe’s long recovery.

Gabe had plenty of time to consider his new way of life. He was a young adult in his mid-20’s, who prior to the accident, worked, went to the gym regularly, and ran several miles every day. Now, he was thinking about getting a guide dog, but that was a practical matter. What about his emotions, attitude, outlook, and approach to the rest of his life? Coming so close to death somehow reaffirmed Gabe’s determination to live a full and meaningful life.

Gabe recovered from his injuries and decided to put his challenges to use in a positive way. Gabe now speaks before large groups of students where he describes all the challenges he’s had to overcome. Gabe shows the groups of students his graphic images; from the accident scene, to CAT scans of his injuries, to photos of him lying helpless in a hospital bed. The talks have also become a perfect opportunity to convey a message on the need for driver safety and awareness, and the responsibility that comes with getting behind the wheel of a car. Gabe closes his presentations playing some selections of classic rock songs on his guitar.

The American Society of Plastic Surgeons recently presented Gabe with the Patients of Courage Award, and recognized Dr. Patel for his surgical talents which gave Gabe a second chance at life.  The award came with a monetary grant which Gabe was free to donate to a favorite non-profit. Gabe chose Robert Wood John Hospital Level 1 Trauma Center’s Safety Ambassador Program.

SOURCE: The Institute for Advanced Reconstruction at The Plastic Surgery Center

About The Institute for Advanced Reconstructon at The Plastic Surgery Center