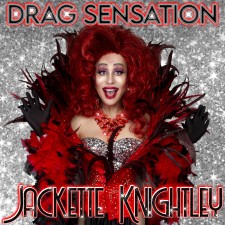 LOS ANGELES, April 27, 2020 (Newswire.com) - It was a night like many at Hamburger Mary's Restaurant in Long Beach (HMLB), the largest drag venue in SoCal, March 8, 2020, as drag legend and social-media relations maven Psycadella Facade hosted her drag show “Facade”. With standing room only, a packed house enjoyed some of America's favorite burgers and brews for which HMLB has become known. Everyone readied for the show as performer Jackette Knightley took the stage, and show producer Big Dee invited everyone to stay and enjoy the 10 p.m. Go-go Boy Dance Party and upcoming Drag Brunches with Exec. Director of HM Entertainment International, Jewels Long Beach, and the “Brunchettes”. This seemed like most nights, except this would be one of the last times this show would go on prior to C-19 temporary shutdowns across SoCal and beyond.

No stranger to a pandemic, this local drag community quickly mobilized locally and abroad to prove they're down, not out, and coming back. Not a political entity, HMLB's reputation for great American fare and drag entertainment (like RuPaul alum: Chad Michaels, Pandora Boxx) has expanded as a hosting-hub for charity events like: HRC, West Coast Animal Awareness, HUB City Autism, Gay Pride, and Easter Walk – an annual fundraiser established in part by the late Garry Bowie, an LGBTQ activist and Exec Director of LB AIDS Foundation, who died of COVID-19 April 9, 2020. He was well-liked by all at HMLB.

Mr. Bowie's death hit home, making C-19 losses more personal. Here's Jewels Long Beach's reaction: “C-19 temporary closures have prompted us to take typical live stage performances to online platforms with digital drag shows. So many of our Hamburger Mary drag artists have been sharing their talents online. We're networking with other drag performers and affiliate online shows across the nation, which have captured the attention of audiences from around the globe. We're helping to keep the arts alive locally and globally, while simultaneously maintaining our charitable community efforts by helping to distribute food to those in need through a local outreach program.” These digital drag shows are attracting scores of international drag enthusiasts as artists unite within the worldwide drag community to help those affected by COVID-19.

One artist, singer/songwriter Jackette Knightley's, digital drag show “Drag Sensation: Almost Drag Hot”, named for her single, “Drag Sensation”, is donating all proceeds from ticket/record sales from the show to families affected by COVID-19. The on line show is: Saturday, May 23, at 2 p.m. PST at StageIt.com. As Jackette Knightley puts it, “this show reminds us about the transformational power of uniting together for the goodness of a common cause.” Psycadella and Big Dee echo this sentiment, “Stay strong! No one's alone! Everyone will persevere! Until then, we'll see each other online at our digital drag shows!”