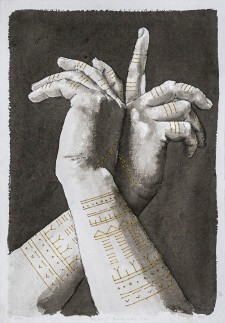 TORONTO, May 16, 2019 (Newswire.com) - Feheley Fine Arts is pleased to present the first solo exhibition of works on paper by Niap (b. 1986), entitled Ivalu. Meaning "sinew thread," Ivalu consists of a series of ink drawings on which the artist sewed tattoos on female bodies, women’s hands and family portraits with either wax thread or sinew in the traditional manner of Inuit tattooing. The exhibition is the culmination of Niap’s visual exploration of traditional tattoo marks.

Traditionally, women were tattooed as part of their journey through life. Each milestone was marked, literally, by a new tattoo. For example, BEAUTY IN OUR LINES presents hands marked with numerous intricate designs signifying an older woman compared to YOUNG HANDS which reveals minimal tattoos of a younger, less experienced individual. As a woman grows older and becomes more accomplished, she earns more tattoos. However, when Inuit converted to Christianity, tattoos were not just discouraged but banned and, very quickly, the practice and its memory were put aside. Very few of Niap’s elders even had a memory of their elders with tattoos.

These works of art with hand-sewn tattoos on the paper are a celebration of this tradition. Niap wanted to bring back these beautiful lines not only as an act of reclaiming the heritage of Inuit but also to highlight the culture. While some have reclaimed this tradition, it is her hope that this exhibition will not only illuminate this practice but encourage more Inuit to return to tattooing. In a sign of her respect and a celebration of Inuit history with tattooing, she has planned a live performance for the opening of Ivalu at Feheley Fine Arts.  Nunatsiavut artist Jessica Coffey will tattoo Niap in the traditional Inuit way, known as tunniit.

Currently based in Montreal, QC, Niap is a multimedia artist from Kuujjuaq, Nunavik. She has always expressed herself artistically since childhood and has only recently started presenting her works professionally; she has quickly gained attention for her art. Niap's practice shifts between sculpture, textiles, drawings and paintings. Through each medium, she reaffirms her culture by incorporating elements that represent her identity as an Inuk woman. “I have been learning more about and finding this new pride in my culture.”

In November 2015, Niap participated in her first group exhibition Ullumimut − Between Tradition and Innovation at Montreal’s McClure Gallery. In 2016, she completed a residency at École nationale supérieure des beaux-arts de Paris and worked with Adventure Canada as an artist in residence. Niap was the recipient of the 2017–2018 Virginia J. Watt Scholarship awarded by the Inuit Art Foundation. In 2017, she created a permanent mural for the Canadian Museum of Natures’ Canada Goose Arctic Gallery. Her installation ᑲᑕᔾᔭᐅᓯᕙᓪᓛᑦKatajjausivallaat, le rythme bercé (2018), exhibited at OBORO Gallery in Montreal, QC, was acquired by the Montreal Museum of Fine Arts in the summer of 2018.

Niap is travelling from Montreal to attend the opening.

For images, additional information or to arrange an interview with the artists, please contact: 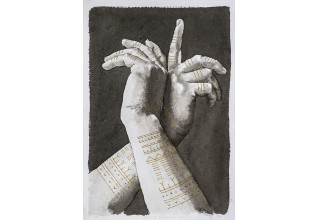 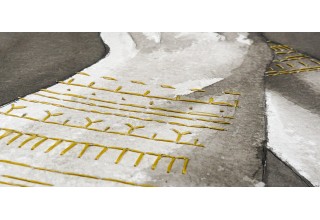 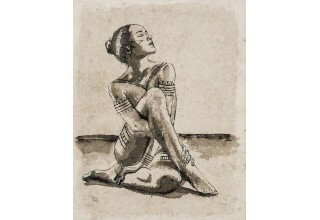 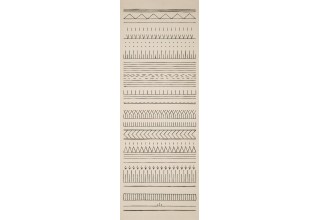